In view of recent media coverage of the UK v EU differing positions concerning Sovereign rights in international law DefenceSynergia (DS) publishes below an authoritative analysis on the subject of the United Nations Convention of the Law of the Sea 1982 – specifically fishing.

The author is a founder member of DS and in a former life served in the RN and RNR.

In the RNR he did his sea training with the ‘fish squadron’, completing the MAFF course and becoming a British Sea Fisheries Officer in 1975. He served in 3 Island class OPVs. After regular RN service – 1987 to 1990 – he worked as operations controller for the Falkland Islands Fisheries Department . Thereafter he worked in West Africa as Technical Adviser to a seven country fisheries project for the NW African Sub-Regional Fisheries Commission financed by the Government of Luxembourg covering Mauritania, Senegal, Cape Verde, The Gambia, Guinea-Bissau, Guinea and Sierra Leone. This project ran until December 2003 and involved aerial surveillance using three regional turboprop planes and patrol boats from the Senegal Navy and the Guarda Costeria of Cape Verde. He was also seconded to FAO, working on harmonisation of fisheries regulations in southern Africa and Indonesia. His last appointment was as project manager for fisheries monitoring, control, and surveillance in the Republic of Yemen between 2004 and 2008.

This is what he says:

As the United Kingdom will leave membership of the European Union on 1st January 2021, it is timely to examine the rights and the responsibilities of coastal sovereign states in relation to their Exclusive Economic Zone [EEZ]. This short paper will concentrate on fisheries management within the United Kingdom’s EEZ, as this is one of the major areas of disagreement bedeviling the negotiations between the EU and the UK. Obviously, there are other responsibilities which include the management of the offshore extraction of hydrocarbons, the preservation of natural resources, the effective management of fisheries, the prevention of pollution and the maintenance of law and order, to name but a few. EEZs extend out to 200 nautical miles [circa 370km] from the low water mark, and in the case of the UK, this covers a vast area as can be seen from the illustrated map.

It appears that the principal EU negotiator takes the position that the United Kingdom will indeed be a sovereign coastal state, but that the fish within the EEZ are, he believes, “common property”. In fact, this opinion is not backed up in law, as will be clear from the contents of this paper. What may have been the case under the European Union Common Fisheries Policy is not backed up under the international legal framework contained in The United Nations Convention on the Law of the Sea [UNCLOS 82].

As a sovereign coastal state, the UK will face the problem of containing illegal, unreported and unregulated [IUU] fishing, which occurs in virtually all capture fisheries, whether they are conducted within areas under national jurisdiction [EEZs] or on the high seas. IUU fishing poses a direct threat to effective conservation and management of many fish stocks, causing multiple adverse consequences for fisheries and for the people who depend on them in the pursuit of their legitimate livelihoods and enterprises. It is difficult to arrive at accurate figures, however it is assessed that IUU represents circa 20-25% of global catch with a value of around $23bn USD. 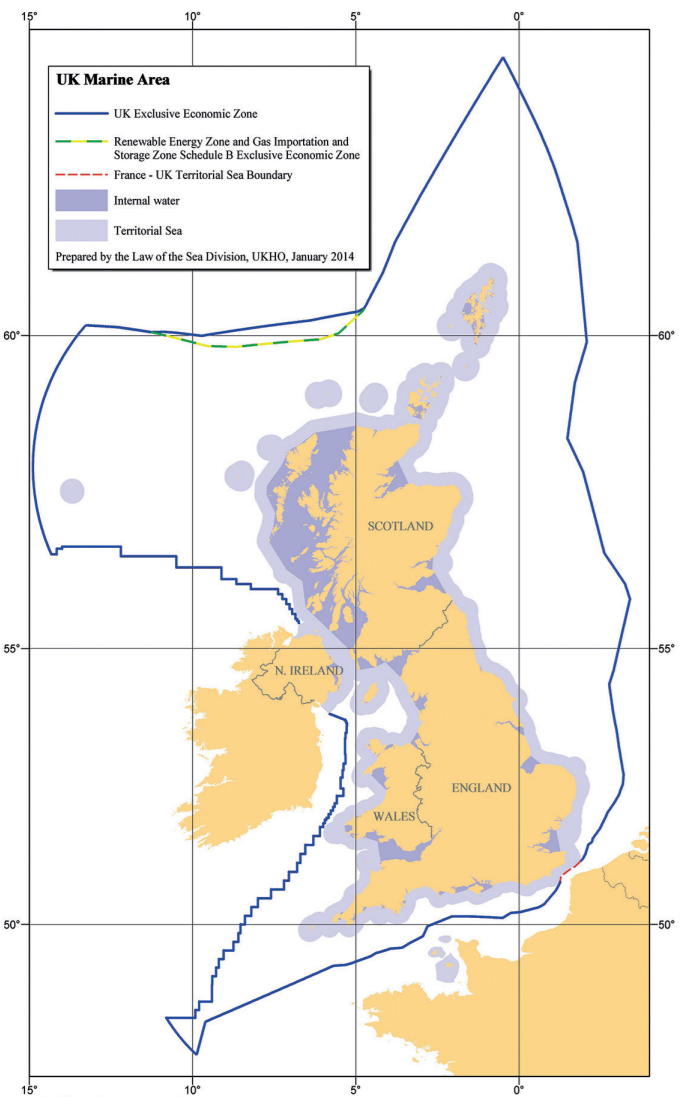 Events such as the last Cod War in the mid 70s between Iceland and the UK were an indication that states whose economy were dependent on fishing were no longer prepared to adhere to the status quo. Proposals to regularise coastal states claims to “territorial waters” were first put before the United Nations in 1973, having developed from UN Conventions on the Law of the Sea held at Geneva in 1958 and 1960. Thus UN legal and marine experts finally drafted what became The United Nations Convention on the Law of the Sea in 1982. UNCLOS82 opened for signatory at Montego Bay on 10th December 1982, and was ratified on 16th November 1994, upon deposition of the 60th signature [the instrument of ratification]. Under the Convention, coastal states are allowed to claim an EEZ extending 200 nautical miles from the low water marks of their coast. Part V of the Convention relates to the Exclusive Economic Zone, and some relevant articles are reproduced below.

The exclusive economic zone is an area beyond and adjacent to the territorial sea, subject to the specific legal regime established in this Part, under which the rights and jurisdiction of the coastal State and the rights and freedoms of other States are governed by the relevant provisions of the Convention.

Rights, jurisdiction and duties of the coastal State in the exclusive economic zone

It is therefore quite clear that from the content of Article 56 the United Kingdom, as a coastal State will have the sovereign right to manage the living resources within its EEZ. The establishment of exclusive economic zones extending out to 200 nautical miles from the baselines has in fact resolved the question of ownership of fish stocks within these zones, by transferring them from common property available to the international fishing community to national property under national control.

Article 57 establishes the breadth of the EEZ, stating that the zone shall not extend beyond 200 nautical miles from the baselines from which the breadth of the territorial sea is measured. Article 58 deals with the rights of other states to overfly an EEZ, and rights regarding navigation, and other lawful activities such as those associated with the operation of ships, aircraft, submarine cables and pipelines. Articles 61 to 63 are both important and relevant to the United Kingdom with regards to the obligations placed upon it regarding conservation, utilization and management of living resources, and are therefore reproduced in full.

Conservation of the living resources

Utilization of the living resources

From the foregoing, it can be seen that the United Kingdom has both benefits and responsibilities as a sovereign coastal state, and that it is also clear as to with whom the ownership of fish and living resources in an EEZ reside.

Thus the prospect of a closed zone, as is sometimes implied by the European side in negotiations is in fact a myth. The British have long standing arrangements which were in place before the EU existed, for example, with Denmark and the Netherlands. Also, consumer preferences within the United Kingdom determine that some species found in the UK EEZ simply do not sell if landed in country. It is also clear that the British fishing industry as it is presently constituted could not catch land or process all the available living resources within the State’s exclusive economic zone. As can be seen from the articles of UNCLOS82 reproduced here, coastal States have a legal duty to allow other States access to take at least part of the surplus. This arrangement would obviously apply as well to species that would not be marketable in the UK.

This situation obviously leads to sensible bi-lateral arrangements between, say Dublin and London, or Madrid and London. What it does not do, however, is lead to blanket negotiation with Brussels under the guise of the European Common Fisheries Policy.

Readers who wish to further study UNCLOS82 can download it in PDF format from UN and other maritime web sites.1

Finally, whether the United Kingdom has the assets to properly police this large are of water, some of which is in the Atlantic Ocean, is another matter entirely.