It is with great sadness that DefenceSynergia (DS) must announce that Michael Waddell, one of our founder members, died on 22nd May 2015 – he was 92. Our sincerest condolences go out to Michael’s family and friends.

Michael joined DefenceSynergia at the outset because he agreed with our intention to get inside the political system and to engage and inform the public. We only discovered after his death the citation for his Military Cross. It is a tribute to Michael’s humbling modesty that he never discussed the fact that eleven British servicemen owed their lives to his courage under fire.

Having served with the 8th Army in North Africa, Italy (where he won his Military Cross), and later Greece, during World War II he witnessed the horror that war brought to nations that were unprepared or that were militarily weak and therefore

he always maintained that for Great Britain the only true course was to be militarily strong in order to deter and prevent future aggression.

If Michael had a constant message for DefenceSynergia it was to do more on the public engagement front. Michael’s wise counsel will continue to inspire our endeavours.

Signed by Montgomery, Alexander and Lesse. The full transcript of Michael’s citation is below for easier reading:

This officer was acting as Liaison officer between the tanks of his Regiment and a platoon of infantry carriers which were leading an advance across the flat south-western approaches to the village of Gerbini. The whole area was dominated by the village, which had been reported as being in friendly hands. When Lieut. Waddell and the carriers were moving across open ground, however, they encountered heavy mortar fire and machine gun fire from the north and Lieut. Waddell’s Daimler Scout car was knocked out. He Quickly contacted Regimental Head quarters on his wireless, which was still working and waited, under fire until a new car arrived for him. The Tanks deployed for action and had advanced some distance on the open plain towards Gerbini, when a battery of 88mm guns firing A.P. Opened fire at short range and knocked out the six leading tanks in quick succession, putting four in flames immediately. The very few surviving members of the tank crews, some of whom were badly wounded and burned, managed to evacuate their tanks, and were under heavy machine-gun fire. With complete disregard for his own safety, lieut. Waddell went forward in his second scout car three times and ferried back eleven of the wounded and survivors. One journey took him beside one of the knocked out tanks where he was within short range of the enemy 88mm guns and under heavy machine-gun fire.

Lieut. Waddell’s cool courage and determination at a most critical time saved the lives of eleven men. I have the Honour to recommend that he be awarded the Military Cross.

A reduced image of the Michael’s original Citation. 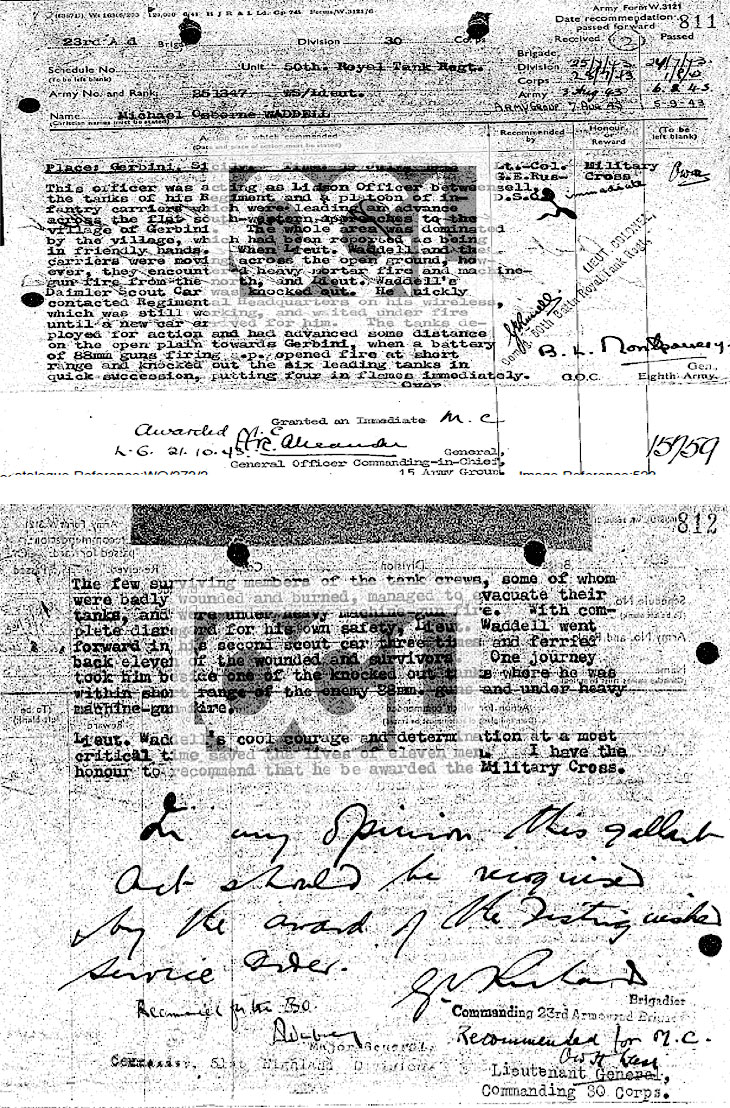