Afghanistan and the Strategic Lesson for Her Majesty’s Government

It is interesting that Ben Wallace is quoted in various news outlets as saying ‘…the option of a unilateral UK presence in Afghanistan was considered. We could have put a force there but we would have had to take ourselves out of a lot of other places around the world. The possibility… was not viable.’

This speaks volumes about the UK’s lack of military mass and resilience and its inability to operate in more than one location and regenerate. Presumably, the Chiefs of Staff would have mentioned to the Secretary of State that the British Army might provide a Brigade (or two) for 6 months. But for anything longer the resources and front line roulement Brigades to replace those in-theatre plus another couple training ready for future roulement are just not available.

In saying this DS is not in any way denigrating the British Army’s professionalism, verve or talent only its capacity for long term deployments above Battle Group level. Not least because the air support required for such an operation would also be fraught with difficulties. It is worth bearing in mind that in 2010 General Petraeus commanded circa 140,000 US/NATO and Allied forces in Afghanistan and that same year General McChrystal is alleged to have concluded in a classified report that to win in Afghanistan would require upwards of half a million troops over 5 years. 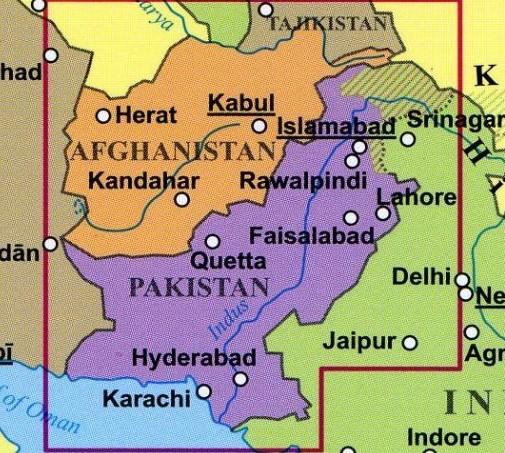 The flying time from Karachi on the Arabian Sea to Kabul is circa 588 NM. That is around the extended combat range of the F35B – see map. If the intention was to offer air cover using a Carrier Strike Group F35B force this might just be doable, but only just, with target area coverage being patchy at best without the support of a USN carrier strike group.

DS like every defence analyst already knows the limitations that SDSR 2015 and the follow-on Integrated Review (IR) have put upon HM Forces: The Royal Air Force has limited AAR/AT, zero AWACS and ASTOR and limited LRMPA ISTAR capability. This all having to be considered before CAS can tap into his limited ability to deploy and sustain Typhoon fast jets in more than penny packets. Some already deployed in the Baltic, Cyprus and Falkland Islands.

For DS, however, the real elephant in this particular room is the total absence of Strategy!

Not once has the Secretary of State explained the Strategic purpose for UK forces to remain in Afghanistan. A region DS was under the impression that UK had ceased combat operations in during the Cameron era circa 2014?

No doubt media commentators and former generals can offer their own raison d’être for UK remaining in Afghanistan but, however, worthy, these are not based on an articulated UK Strategy, so much as personal desires. In the aftermath of 9/11, the aim was to overthrow the Taliban to prevent them hosting Al Qaeda. And this was achieved. Then, almost as an afterthought, it was assumed by some that a western-style democracy could be established.

Preventing Al Qaeda from having a base of operations against the West had its roots in Strategy. But, in so far as theories of nation-building go, this is not Strategy but muddled and, in the light of experience, failed thinking.

Indeed, if General Petraeus commanded 140,000 troops in Afghanistan it would be worth the Secretary of State for Defence to reflect that in today’s post-IR money that represents the total manpower establishment HMG has allowed for the British Army, Royal Navy and Royal Air Force. How CDS and the service Chiefs must have breathed a sigh of relief when, on cue, Britain’s allies, realising that without the USA there was no hope of success in Afghanistan, rightly decided that prudence, in this case, was the ‘better part of valour’.